Potato and leek soup – vegan. This vegan potato leek soup is everything you want a soup to be! It's warming, comforting, hearty, satisfying and oh, soooo delicious! Potatoes are total comfort food and blending them up in a creamy soup with leeks and onions and spices and garlic and all kinds of good stuff, well you know it's going. 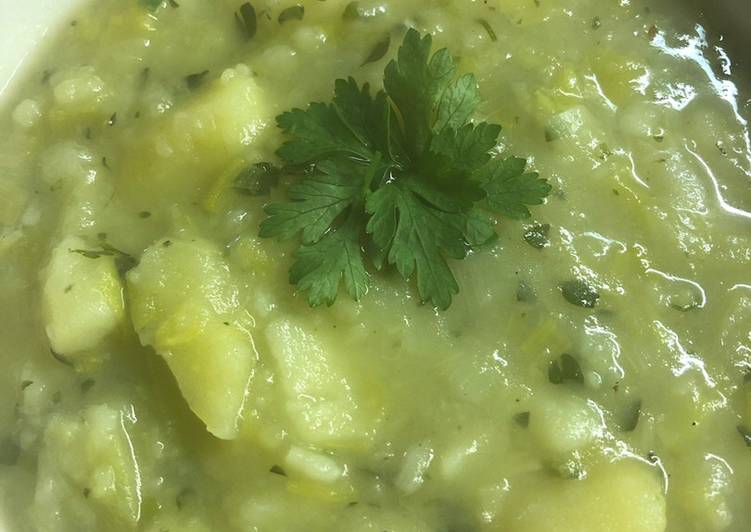 Making a vegan version of this classic soup was a breeze. A combination of coconut cream and white miso mimic the salty creaminess of the butter and cream used in "traditional" potato and leek soups. The coconut cream won't actually make this soup taste like coconut – I promise. You can have Potato and leek soup – vegan using 8 ingredients and 5 steps. Here is how you achieve it.

Soup lovers, can I have your attention please? You are not going to want to miss this potato and leek soup recipe, trust me. If you are anything like me, you love soup! And I mean, hellooo… what's not to love?

Potato leek soup, or potage parmentier, is a French classic. It's one of the first dishes I learned to make in culinary school, right after a proper omelet, because it's an essential base soup in French cuisine. Add watercress for potage au cresson, serve it chilled for Vichyssoise — or top it with bacon. A hearty, creamy and dairy-free potato leek soup that will most definitely hit the spot during these cold winter months. This creamy vegan potato leek soup combines my two favorite things along with a somewhat underrated winter vegetable: leeks.